In what way is spiritual science a science?
Top

It's hard to tell what sort of details you are asking about without narrowing down the question more. So my response is an Introduction from an Anthroposophical book I started reading, which will probably be relevant to what you were asking. 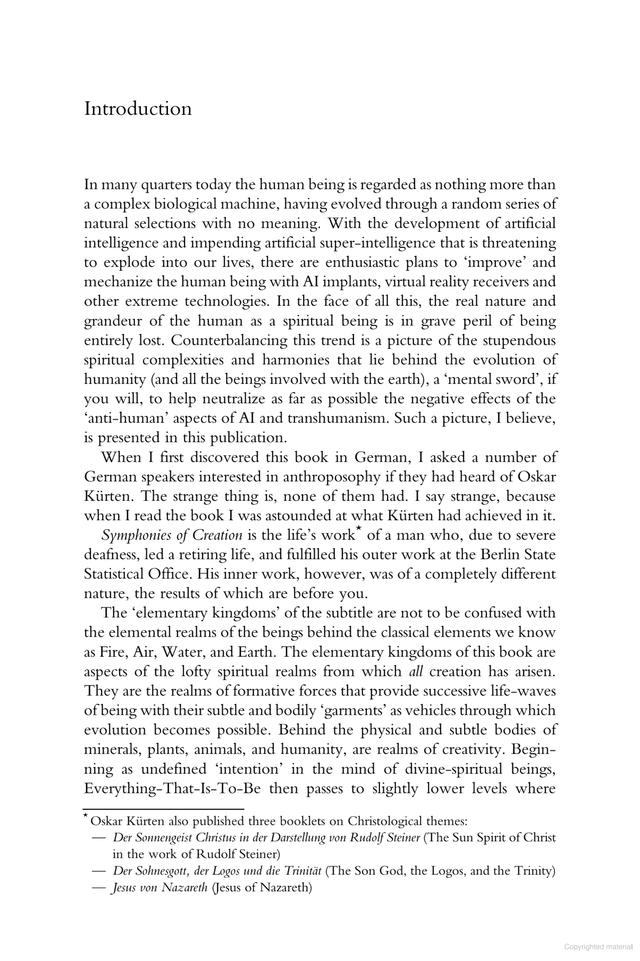 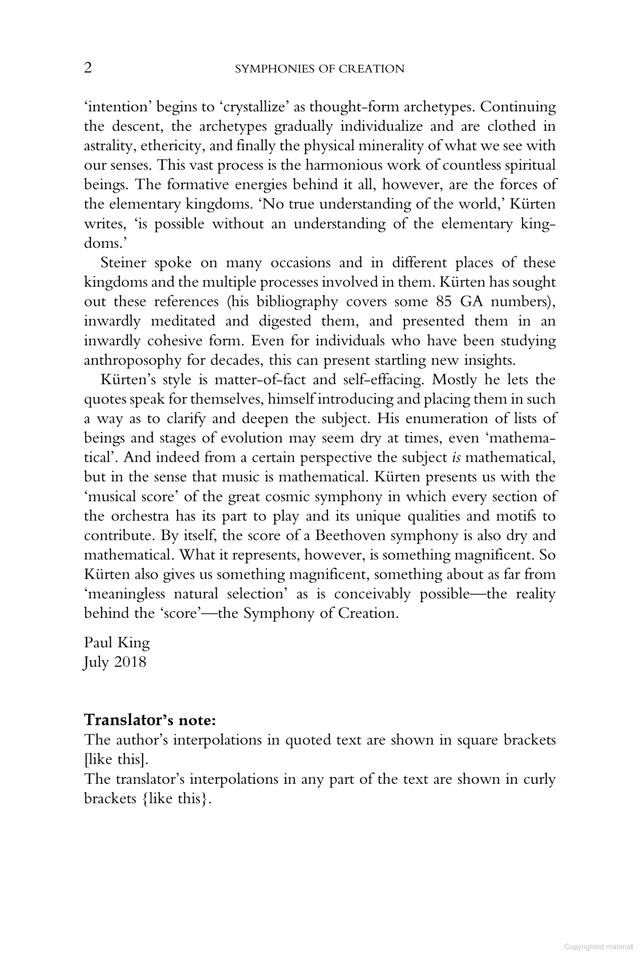 "Two souls, alas, are housed within my breast,
And struggle there for undivided reign.
One, to the earth with passionate desire,
And closely clinging organs still adheres;
Above the mists the other doth aspire
With sacred ardor unto purer spheres.”
-Goethe, Faust
Top

Before getting on to spiritual science It would be better to understand what is science?
Science has now reached a point where we need to really question science itself.
Understanding, experiencing and knowing are activities that happen in reality and science is not able to include them in the sylaabus.
We need to expand the word science to include existential reality of both material and the non material existential concept like
love ,relationship,trust etc.
We need to know them identify them and remove imaginary concepts like hate which is just absence of love and nothing in itself.

Do let me know if this sounds too complicated to comprehend and needs more explanation.
It would be real fun to try and help make this knowledge easier for people to understand.
Top

Anthony, I guess, like coexistence says, it will be most useful if you think first about what (regular) science means to you. This really boils down to the question: what role does understanding hold for the human being. And obviously, understanding shouldn't be limited to building an intellectual replica of reality. At the heart of the human condition is this expanding intuitive orientation within reality. Building an intellectual copy of reality has become a thing only in the last few centuries (where we live in intuition only for our own thoughts).

At the core of the question, and where really this East-West split occurs, is our whole soul attitude towards this being of growing intuition that makes sense of reality. One tendency sees this growing orientation as the Sisyphus myth - something grows, emerges from the instinctive depths of reality, then gains local-to-the-soul-bubble intuition of the Cosmos, which however, is seen as a kind of double life, as a specter that grows in intuition but the more it grows, the more incompatible it becomes with the fundamental grounds of reality from whence it has emerged. In other words, our being inflates as a balloon of intuition that recognizes the lawful metamorphoses of reality but all this intuition is felt to be opaque to the true grounds of reality. Thus our human life is felt to be paradoxical, much like the Sisyphus myth, where we grow into something only to realize that the more it grows, the more remote it becomes to the essential foundations of the Cosmos.

But could it be that holistic intuition is one of the poles of reality? I've used this image many times already: 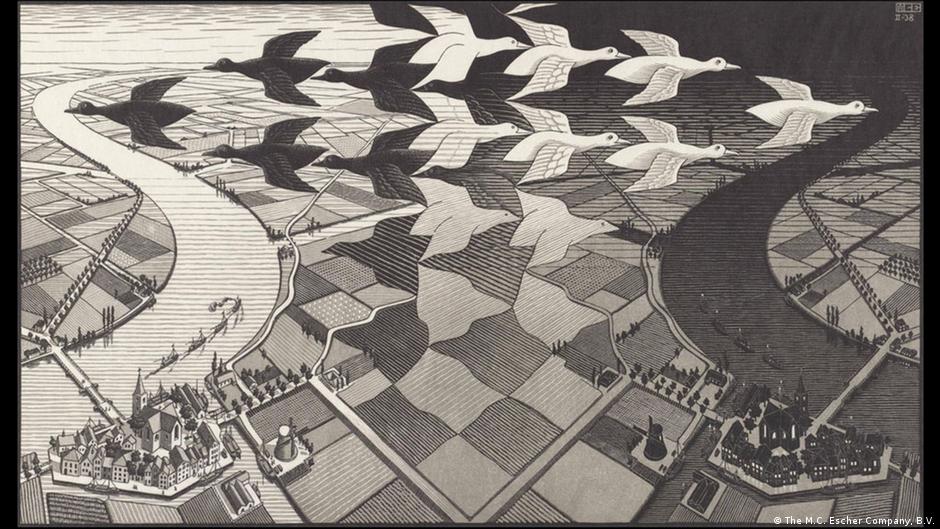 Imagine that you see only the right side. That could correspond to the dark container of consciousness where sparks (white birds) of intuition flock. The more we move to the left, the more intuitive orientation we find within the dynamics of the flock. If we're unaware of the left pole, we feel as if we're building a tower of cards, just like we feel about technology today. Our whole civilization is towering on fragile foundations. We don't even dare to imagine what would happen if, for example, the Internet collapses. Thus we feel similarly about the growing being of intuition. Yeah - it's curious, it's interesting, yet it ultimately alienates us from our true foundations.

But what if we haven't yet reached the tipping point, where we begin to sense the holistic intuition of the other pole? Then we see reality in the other way - not half empty but half full. Then our present human condition is seen as truly emerging from the darkness of unconsciousness but this darkness is rather grasped as hollowed out consciousness. Thus suddenly our growth in intuitive orientation within reality turns out to be evolutionary restoration to full Cosmic consciousness.

This picture is, of course, simplified because it presents existence as a somewhat flat surface that simply doesn't have all the pixels lit, but I believe it makes the point.

I know from what you've said before that you are on the fence about this (although we have spoken about it in a different context). It is interesting to me whether after all this time you have come to recognize better this inner conflict within yourself? Are you able to identify that conflict with something like the above? If you can't identify the root of the conflict as the attitude towards the questionable place of our growing intuitive being, how would you describe it? If you grasp the half-full perspective, would that make more comprehensible why humanity instinctively seeks to grow into the intuitive being of reality and thus has proliferated philosophy and science in search of such intuition? Would that make it comprehensible why this process should go even further and grow into the intuitive being that weaves beneath the surface of our intellectual ripples? How would you call such a body of growing living intuition of reality - not simply an intellectually-intuitive replica of reality but living resonance with the intuitive forces that weave reality?
Top

It's hard to tell what sort of details you are asking about without narrowing down the question more. So my response is an Introduction from an Anthroposophical book I started reading, which will probably be relevant to what you were asking.

As I consume more of Steiner's body of work, I find myself asking the question, "How do you know?" Steiner's works are replete with fantastical claims of knowledge, even down to what some figure in the ancient past said, even though we have no documents recording the utterance.

One of the criteria of science as we understand it is repeatability. Has anyone else been able to confirm what Steiner has declared? What would even constitute a confirmation? Could we in principle falsify a claim of Steiner (or any other spiritual scientist)?

Then there is the question of publicly available evidence. Given a suitable aptitude with appropriate training, the findings of science are open for interrogation by anyone with the will and means to do so. Is this true of spiritual science? It seems like there are uncontrollable factors, keys held by the gods, whereby one never knows whether the doors to the higher worlds will be opened.

The knowledge obtained through SS is via personal experience, which would cause most natural scientists to bristle.
Top

there is no such thing as 'spiritual science', just as there's no such thing as 'matter-based science'. Science is a method\system for acquiring human knowledge . . . and science as a body of knowledge goes where it goes.
If someone wants\wishes science move in a certain direction, then it's up to that individual or group to use the methods of science to move it in that direction.
Top

lorenzop wrote: ↑Sun Nov 27, 2022 4:00 pm there is no such thing as 'spiritual science', just as there's no such thing as 'matter-based science'. Science is a method\system for acquiring human knowledge . . . and science as a body of knowledge goes where it goes.
If someone wants\wishes science move in a certain direction, then it's up to that individual or group to use the methods of science to move it in that direction.

'Spiritual' in 'spiritual science' has to be understood as 'pertaining to thinking'.
So spiritual science is the science of thinking. Thinking is not an experience we have through the 5 senses, which makes it spiritual = not sensible, not done through the 5 senses.
“If we understand and feel that here in this life we already have a link with the infinite, desires and attitudes change. In the final analysis, we count for something only because of the essential we embody, and if we do not embody that, life is wasted.” (Carl Gustav Jung)
Top

lorenzop wrote: ↑Sun Nov 27, 2022 5:06 pm So we can refer to spiritual science as the study of thinking and it’s not a science, but perhaps a branch of philosophy or psychology.

We could, but Steiner uses the word 'science' on purpose, to say that thinking should be studied with scientific (not dreamy or mystical) approach.

As you wrote, "science is a method\system for acquiring human knowledge", and as such, it's applicable to any phenomena.
Why don't you like the idea of scientific method (however you prefer to describe it) applied to the experiential phenomenon of Thinking?
“If we understand and feel that here in this life we already have a link with the infinite, desires and attitudes change. In the final analysis, we count for something only because of the essential we embody, and if we do not embody that, life is wasted.” (Carl Gustav Jung)
Top

I didn’t know (but should have) that this question was a Steiner, haha.
I am not opposed to the study of thinking as a science, I’m all in. Other than correlating thinking with electrical impulses and brain imaging I’m not aware of science doing anything with thinking currently
Top
Post Reply